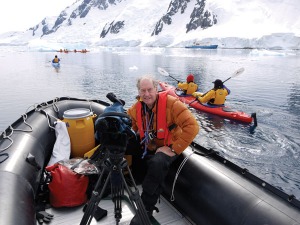 From tornado chasing to cave spelunking, director and producer Peter Rowe has faced his share of dangers. But his next adventure may be his greatest.

It was nothing more than a rusted fishing boat with one of two engines working. The vessel rocked and rolled through unforgiving waves and pouring rain. Crew members used buckets to empty the sinking hulk of metal, while swell after swell continued to fill it—an ongoing battle that seemed to be a lost fight.

Gusts of wind spraying saltwater made the long journey slow and treacherous. The typically four-hour trip took well over 10, and precious time was spent backtracking to retrieve a lost dinghy. But Angry Planet (OLN) director and producer Peter Rowe, the show’s host and the crew members were steadfast. They wanted to be among the first people to set foot on newly created land off the shores of Tonga, the Hunga Ha’apai. Making it ashore proved a difficult challenge: there was nowhere to anchor the boat. The land, created out of the slowly cooling ash caused by an underwater volcano that had recently exploded, was still unstable and rocky. The kayak that was used to transport equipment from boat to land was just as futile, capsizing in the shark-infested waters. “We had to stuff our equipment into dry bags and swim ashore,” chuckles Rowe. “One of the bags leaked, ruining two cameras and a microphone. But we had to make do.”

Feeling the ashen ground beneath his feet was a blessing, but with the sun setting and the volcano still active, Rowe and his team only had a few hours to spare on Hunga Ha’apai—just enough to time to film his segment and cement his claim as one of the island’s first visitors. (A team of four had visited earlier.) “It was still hot to touch,” says Rowe. “You could still see the steam coming off of the phosphoric land and newly created crater lake.”

As both a natural-born explorer and producer of Angry Planet, Rowe spends most of his time travelling the world looking for “extreme forces of nature.” On previous trips, the adrenalin junkie had crossed Baffin Island (mid-winter), climbed active volcanoes (Semeru, Indonesia; Nyiragongo, Democratic Republic of the Congo; and Stromboli, Aeolian Islands), and chased tornados and hurricanes throughout North America—all of which were broadcast on television networks around the world. The Winnipeg native has also created feature documentaries, including the controversial Beyond the Red Wall: The Persecution of Falun Gong, an edited version of which was aired on CBC in 2007.

That was then. What Rowe wants to talk about now is his recent trip to northern Mexico where he was given permission to enter the Cueva de los Cristales, or Cave of Crystals. And this time, Rowe carried the Explorers Club flag while exploring this extreme environment.

The trip to the remote village of Naica took Rowe and a team into a blisteringly hot cave, about 300 metres underground, surrounded with some of the world’s largest crystals. Unlike other caves, where the temperature generally gets cooler as you descend, the Cueva de los Cristales is situated a mile above a magma flow. Within the central cave, the temperature can reach up to 50 degrees C, with 90 to 100 percent humidity. Each trip has the potential for a heat stroke and for this expedition, Rowe trained in a gruelling 65 degree C sauna for half an hour each day.

His training paid off. Rowe didn’t want to end up like the mummified miner of Cueva de los Cristales lore. “He wanted to strike it rich by stealing some crystals from the cave,” says Rowe. “He went in with no more than a garbage bag filled with cooled air. A couple of days later when workers entered the cave again, they found a dried out husk.” The environment in the large cavern of crystals is such that it took only a few days to mummify the miner.

Created over hundreds of thousands of years, the cave was discovered by a pair of brothers in 2000. Massive pumping to bring water above ground for mining purposes in 1985 had lowered the water level in the cavern. Scientists say that as the magma cooled over the thousands of years and eventually stabilized to 58 degrees C, the groundwater, infused with calcium sulfate, began to convert to selenite, slowly forming tiny bricks and then crystals. The unchanged temperature within the cave allowed the sizable crystals to grow, making these ones mammoth compared to the relatively minuscule crystals found in neighbouring caves.

Behemoth in size, the width and length of the crystals (some are as long as 11 metres and weigh up to 55 tons easily consume the expanse of the buried room.  Preserving and studying (not to mention filming) the crystals is a massive undertaking. Sharp crystals pose deadly obstacles and visiting teams must wear specialized cooling suits that allow for 20-minute visitations.

But television equipment wasn’t all Rowe’s team packed on this trip. As a member of the Explorers Club, Rowe carried an Explorers Club flag on this Mexican expedition. Of 202 flags, some retired or lost, this particular flag has been taken 12,000 feet underwater into the depths of the ocean, through the overgrown forest of the Amazon and was once aboard a ship chased by Nazi soldiers during the Second World War. Rowe was attended by a Mexican team, an Australian adventurer and the host of Angry Planet, George Kourounis. We’re going to see what we can find out about some earthquakes that hit the cave at one time. It’s always interesting to find these miracles of nature. And it’s a privilege to continue to do this.”

Admitted into the Explorers Club in March 2008, Peter Rowe’s show, Angry Planet, is now in its third season on OLN, with the first and second seasons available in DVD boxed sets. This is Rowe’s first flag expedition for the Explorers Club. For more information on the Explorers Club, visit its website, explorersclub.ca