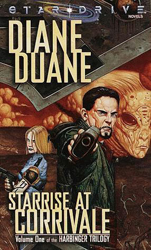 “Excuse me, Ambassador, but what’s a bedbug?” –Captain Dareyey

The first to write within the Star*Drive universe, Duane has not been the last. TSR’s science-fiction role-playing game Alternity, which I’m slightly intrigued about and may end up playing soon, is brought to life through the protagonist Marine Lieutenant Gabriel Connor.

While I have never read a game-related novel, Diane Duane is a childhood favorite. Add to the fact I have never played Star*Drive, and I really didn’t know what to expect.

What I found was a very much recycled story that revolves around a soldier duped into taking the fall for a sinister plan, disgraced and given the boot. Said character aims to uncover the corrupt system, to regain lost honor, while becoming a hero in the process.

A Marine for Galactic Concord, Lieutenant Gabriel Connor is the typical attractively intelligent man, who climbs the ranks quickly. He has the favor of Ambassador Delvecchio, a sharp-witted women who commands those around her with the wave of her finger at 133-years-old — a character who’s ferocity and personality I quite admire.

After Connor is assigned to become part of the military contingent accompanying a diplomatic mission, in which war has waged for hundreds of years, he is thrown into an unexpected position of handling negotiations between the two worlds. Accused of assisting in a murder, Connor is — as is typical — discredited and told to leave.

Given a second chance for redemption by Concord, Connor grabs the opportunity. Along the way he befriends an alien and meets many interesting people.

Much of the first few chapters are a slow progression, introducing characters and establishing the plot. While space combat is always interesting, Duane is at her best when her characters interact. Delving into the psyche of both mankind and aliens, Duane brings up moral dilemmas and pressing situations.

Duane’s style of writing is quite, even surprisingly, different from that of her young adult novels. If not for the name on the cover, I would be easily duped into thinking it was another author. Duane’s traits for establishing characters and keeping the interest of readers is still within the context of the novel, but the manner in which she describes the scene and foreshadows the future is much more complex.

Slow to start, but action-packed with an intricate political skew, Starrise at Corrivale brings to life a much-beloved gaming universe and makes it work. While this first novel in the Harbinger Trilogy can be considered snail paced at times, it works by establishing the world for its two successors. It does take some free time to read as it gets dense and wordy, but it may be just for you.

However, there are some issues with editing, so if that kind of thing annoys you, stay away.