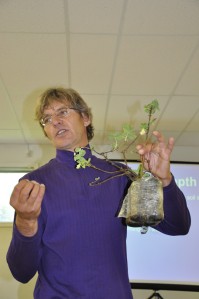 The topic of haskap berries was discussed at a seminar on Oct. 15.

Organized by the Grand Forks Economic Development Task Force, agricultural co-ordinator  Bob Kendel and Gary Smith called in expertise from Saskatchewan to educate the community on the berries.

“I think there’s great potential for something to happen,” said Smith. “This may be it, or it may be something else, who knows but we have to start somewhere.”

Kendel agreed, “Hopefully this initiative has taken root here, even if we don’t know where it will take us.”

President of Haskap Central Sales Ltd. Curtis Braaten worked along side Dr. Bob Bors, who started cultivating the plants at the University of Saskatchewan six years ago, and provided a look at the potential haskap berries could have in Grand Forks.

“I think that in terms of a community initiative, for the plant to grow successfully, the community has to embrace it. One person alone will have a difficult time,” stated Braaten. “The prairies are currently working under a co-operative initiative and Nova Scotia is doing the same thing.”

Coun. Joy Davies felt optimistic. “I think haskap berries are the up-and-coming agricultural product and we’re not telling anybody about it. This is a Grand Forks and community-based initiative because without our people here, this wouldn’t be happening.”

A surprise visit by Parliamentary Secretary and MLA for Chilliwack John Les provided another level of government to discuss Grand Forks future.

“It’s very interesting and something I hadn’t heard about until a few months ago,” Les said.

“I think a lot of credit goes to the people in Grand Forks for putting this seminar together and learning more about it and the opportunities. When I was here a few weeks ago it was clear that there was a lot of opportunity for growing agriculture produce and a variety of different kinds. This could be one of them. ”

Braaten stated that studies on haskap berries have revealed that it contains more antioxidants than blueberries, and more vitamin C than oranges.

“There are many health benefits with the haskap berry, especially since blue is a favoured colour for fruits right now,” explained Braaten.

Les felt that the health benefits and the hardiness of the crop is a plus for the plant.

“I haven’t heard of a place where it won’t grow and you never know where you’re going to find the next great idea,” said Les.

Braaten thinks there is a lot of potential for the haskap berry in Grand Forks, especially with the central location of the main highway cutting through the downtown core.

“You can draw visitor’s off the highway with a market involving both farmers and artisans. It’s a community effort to get your products for the right price,” he citing, comparing it to the market in Nova Scotia.

Smith, who is running for council, explained the haskap berries would be a project integrating the community and city council.

“This will make Grand Forks a place to be reckoned with,” concluded Smith.