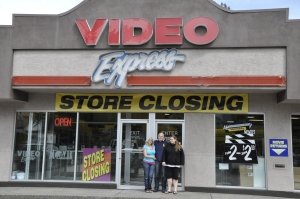 Grand Forks’ Video Express on Central Avenue will be closing its doors next month due to declining customers and sales.
“Basically we’ve had about a third of customers gravitate towards other means because there are so many options today that you can pick,” said owner Chris Smith. “There are other avenues that one can pick to receive entertainment, such as downloading (which a lot of people do), or Shaw Cable.”
Smith said that Shaw’s new offering and range of films has also had a large impact.
“They did that three months promotion over Christmas time for nothing to get people on board and that attracted a lot of people towards it because it’s easier for them and particularly when it’s free initially,” he explained. “Customers found it convenient even though they ultimately pay more.”
The advent of technology has also offered more options, including online streaming and Netflix, a site that offers older films and television series online.
Smith added that even cell phones are now equipped with a lot more options than previously.
“It’s another percentage of customers gravitating to something a little bit easier,” Smith said.
“In essence, over the last two years, about a third of our customer base has gravitated to other means and the two-thirds that we have left, although it’s a really good two-thirds, doesn’t keep our store afloat.”
Despite the ongoing support, Smith explained that they tried to stretch it out as long as they could.
“The store closing not only means the business not being here or the service, but also a loss of jobs for staff,” he said. “We’re trying to keep it going for as long as we could, but in the end, the income coming in isn’t supporting the outgoing services. A third of the customers is a lot and we didn’t have that big of a margin, even when we scaled back.”
In a town with a small population, if some customers leave, the impact is felt more than in a bigger store, Smith stated.
“If it’s a larger town and it shrinks, there’s still a sufficient number of people who are coming in, but because it is a smaller town, to try and support a store this size is hard,” he said.
Grand Forks resident Liz Martin is disappointed to hear about the closing of the video store.
“I guess it is a sign of the times!” she said. “ I was a frequent visitor and enjoyed talking to the staff also.  It will be quite a loss for our town, and now video lovers will have to invade the library, as they seem to have quite a good selection of movies.”
Smith noted that the store will be open for another four to five weeks, but it depends on how long it takes to sell the inventory.
Video Express first opened in Grand Forks in October 1994, and has been in its current location on Central Avenue for the last 10 years.
“Thank you to everyone for their patronage and support over the last 18 years,” Smith concluded. “I’m very sad to be closing it and it’s not something that we wanted to do.”
Though farther away, Video Express has stores in Castlegar, Creston and Armstrong.