BinPad hopes to clean up at Dragon’s Den

Mushed newspapers, empty cans and scattered debris is a common site after a windy day.

A windy day leaves recycling bins scattered on the streets.

Sometimes a good Samaritan will be kind enough to pick up the trash, but more often then not, city workers are tasked for clean up duty – at a cost.

It’s that cost to taxpayer’s that had a local man come up with the BinPad Product, an innovation that has entered the Dragon’s Den.

“In February, we attended a open audition for CBC’s Dragon’s Den and are currently waiting for the call back for production filming,” explained Steve Onland. “At this point we are hoping that the Dragon’s Den will prove positive for the product, as well as allowing a business plan and marketing company to take over.”

As a horticulturalist for the city, Onland often provides help in litter cleanup during the offseason or winter months.

Over the last few winters, he found that he and his co-workers spent too much time and taxpayers dollars cleaning up debris from tipped over recycling boxes and garbage cans.

“I began to research and prototype a solution that would assist in keeping these receptacles standing at the curb and reducing the amount of garbage and recycling litter in our city,” he explained. 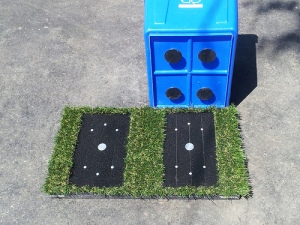 The BinPad Product is a simple design, yet effective.

As he looked into creating a prototype, Onland realized there were some major factors that had to be addressed.

“We needed something that would at no time be a hazard or above ground level that would be a liability for residents as well as the municipality,” he said. “We also needed a product that was well built and could withstand temperature changes, as well as not be a eyesore to the public and landscape of our boulevards.”

Another issue was coming up with a product that would be acceptable to the garbage and recycling collectors and wouldn’t hinder their job.

The implementation of BinPad into the city’s garbage services would have major benefits, including cost savings, he added.

Simple in design, the BinPad are small pucks that are attached to the bottom of a recycling bin or garbage can. After an artificial turf is attached to the ground that matches one’s property, the bin will stick to the turf (similar to Velcro) so it won’t fly around on a windy day.

“I have used Hamilton as the springboard for introducing the BinPad and also for hearing what our residents think about the concept and prototype. Most are interested in the product and do see that we need an improvement to the current system,” Onland said. “I have also spent some time speaking with the waste and recycling employees in the city to see if there would be any fallbacks to them using the product on a daily basis.”

Onland noted there has been a small amount of BinPads built for pilot programs, with the hope it becomes visible at public home shows and locations later this year.

Aside from waste flying around, it also creates a permanent location for bins on service days that is away from the roadways and sidewalks.

“(This) reduces the hazards of bins on streets, as well as keeping them stationary when empty and less susceptible to blowing in the wind,” he said. “We are currently working on the BinPad Plus, which is a single pad that connects to the original BinPad and allows the homeowner a pad for waste containers and organic wheel bins.”

“I have gained very positive response about the product and hope to canvass to municipalities in Canada and the U.S in the near future,” he said. “We have received inquiries from municipalities in Erie Pennsylvania, Florida and North Carolina. Locally we have been asked by Halton to demonstrate the product to the waste division as soon as the patent and prototypes are approved.”

Onland hopes to begin the pilot programs in the spring, but before engaging in other cities, Onland hopes to solve the problem of flying debris in Hamilton first.