It’s been slow going but the upswing on Barton Street was one of the reasons Maria Daniel decided to open her creperie there. 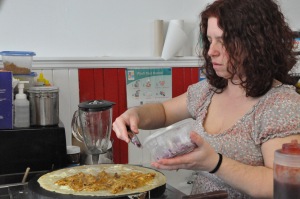 Hargitai’s, her Hungarian maiden name, will be celebrating its first year on April 13 and though it faces the same challenges of all businesses in its first year, Daniel stands by her choice of location.

“There’s no denying the real estate is much more affordable here than anywhere else,” she explained. “I also look at it from a sentimental perspective. This area needs happy things and legitimate business, as well as people who are willing to take the risk and jump in.”

Located at the heart of Barton Village (304 Barton Street E.), Daniel noted the street has already improved but there is a long way to go.

“This area didn’t get like this over night and it’s sure not going to fix itself overnight either,” she said. “Some people have a pre-conceived notion about Barton Street and because of this, they don’t want to come to Barton Street but I strongly urge them to overcome those notions and give this area a chance.”

Developers from Yoke Group Inc. are also hoping renovations to a recently purchased building will slowly shed the negative view people have of the street.

“It’s not like we’re buying here expecting miracles to happen overnight, but we see potential with the growth here and we hope to bring proper businesses back into the area,” Anthony Quattrociocchi said of Barton Street.

Decisions are based on a five-year outlook and where the company believes a location will be in five years, he explained.

Much of the properties on Barton Street have been left alone without maintenance over the last 10 to 20 years, Quattrociochhi added, but they remain in their natural state.

“We look for nice buildings that we think we can bring back to life and Barton Street has a lot of those buildings,” he explained. “We want to get the ball rolling. When people see you doing the renovations it entices them and makes them look at their building.”

The 12 unit building was bought on Nov. 1 last year with renovations completed late January. It has four commercial units and eight residential rooms that features two bedrooms, 10-foot ceilings, and over 1,000 square feet of space.

A bicycle repair shop is slated to open on April 1 in one of the commercial units, but there is already a waiting list for the residential apartments. His partner Eric Cardillo noted development on the street is slow but it’s very similar to what occurred on Ottawa Street and what’s currently happening on James Street.

Two small businesses that have been on the street for over 50 years welcome the sight of new development.

With its butchered meat and freshly prepared sandwiches, Duartes’ Supermarket has been a corner store staple for many families and blue-collar workers.

Alcino Duarte, who intends to take over when his parents retire, noted much of the changes on the street are also reflected in the population.

Twenty years ago Duarte recalls most of the residents were Italian, while 10 years ago the population was mostly Portuguese. Now the community has become a mixed culture as the Portuguese families move out to the more urban areas. 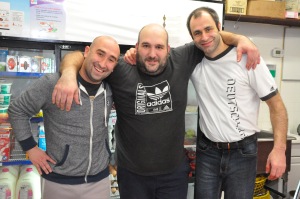 “Duartes’ still offers the same prices as 20 years ago and the price increases hasn’t been reflected in our store,” he explained. “Barton Street is an area that has a lot of low-income families, including problems with drugs and prostitution… but recent changes such as the banners hung from the side of light posts, are good for the community.”

In operation since 1915, Kenesky Sports and Cycle has seen the transformation that has occurred on Barton Street.

“It was good back in the late 60s and early 70s, then it became crappy before it came back a bit,” explained owner Joel Hulsman. “It went (downhill) again when the Wesley Centre opened up, which is a drop-in centre for the homeless.”

However, Hulsman noted things are starting to change with the addition of the hospital, the upgraded elementary school, and new businesses on the street.

“The upgrades (Yoke Group) did to the building have been great,” Hulsman said. “In five years, Barton Street is going to be vibrant.”

“We’re really on a roll and we’re in the right direction even if there’s a long way to go. We have to deal with the business owners with buildings that are all boarded up,” she said. “We have to get the landlords to take responsibility, gain an interest and fix up their buildings.”

Though the street has always been a launching pad for Hamilton, there hasn’t been too much activity in the real estate market around the area, said President Elect Tim Mattioli of the Realtors Association of Hamilton-Burlington.

“Barton Street will always be there and have its own strength but that changes with each generation,” he said.

Hamilton’s downtown core is an example of what can be done to rejuvenate Barton Street, when blocks of properties are bought and either rebuilt or repurposed, explained Mattioli.

“It’s hard to rejuvenate a place without development,” Mattioli said. “One of the biggest problems is that people believe Barton Street is a dangerous place, but it’s not. The beauty of Barton Street is that it maintains the neighbourhood vibe lost in many urban areas.”

People tend to think progress has to be big and shiny, but that’s not the case, he added.