Of the 52 available candles at Wick’d Wax Creations, each homemade and handcrafted candle is a delicate process of mathematics and chemistry. 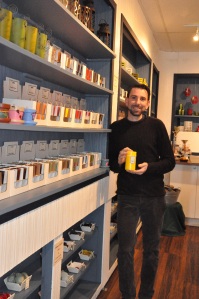 From the number of drops of oils to the slight adjustments in colouring, each candle is uniquely different.

“I use a liquid dye and essential oils in my candles, so one candle varies from another candle,” explained owner Wes Fletcher. “A grape juice candle may have an X number of drops, lets say 10 drops, while a vanilla candle may only have two drops of fragrance to work with that candle.”

Each candle also has a different wick, with some fragrances more powerful than others, and usually takes him a day to create.

“The substance of a fragrance is sometimes harder to burn so you have to figure out the math of that particular candle,” he added. “Each colour is slightly different for each candle, and ideas for scents are sometimes requested and sometimes my own.”

His goal is to eventually carry 100 fragrances in his store on Ottawa Street.

Fletcher’s interest in candle making began over a decade ago when he started working part-time for a company that made candles in a honey barn.

“I thought it was interesting and when I went to Niagara College, I decided to do my coop with them,” he said.

From there he worked from the ground up and became the manager at a candle store before branching out with a couple of friends to open his own store.

“I decided to take a hiatus but I recently got my equipment back last year and started making candles again in my living room,” said Fletcher, noting he started promoting his products at craft shows in Hamilton before opening his store.

Popular fragrances include Wine & Roses, which has the soft scent of roses and a dash of wine, as well as the China Rain, which has a soft floral base.

Another product Fletcher was inspired to create includes his Fire Starters, which consists of recycled wax and wood chips put together in a cupcake like container.

“All you have to do is nestle them inside the logs of a wood stove or campfire, which also helps eliminate the use of newspapers or kindling,” he explained.

The Fire Starters take around 20 minutes to get started and also provides a soft fragrance.

All his candles are made with a petroleum byproduct (paraffin wax), though Fletcher aims to expand the line to include soy and beeswax.

Wick’d Wax Creations will celebrate its grand opening on May 4 from 10 a.m. to 5 p.m.