Chester’s Beers of the World consolidates with Finger’s

After 30 years in business at 60 King Street E. Chester’s Beers of the World is moving its bar and restaurant next door. 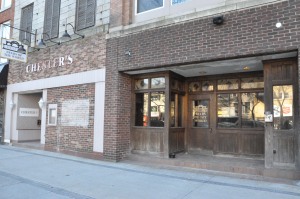 Chester’s Beers of the world moves next door.

“We’re consolidating (Chester’s) with our establishment next door, Finger’s Bar and Grill – we’re rolling it into one,” said owner Michael Robis.

Robis said the decision was based on a drop in customers.

He said there used to be lots of working people in the core who would stop by for drinks for lunch or after work.

“Businesses change because the area changes. Right now there’s not as many people working in the area so you have less to draw from,” he said. “Now I don’t need as much space as I did.”

The restaurant and bar will remain under Chester’s name and will reopen in early March.

Robis’ father, Lou, opened Chester’s Beers of the World at 60 King Street E. on April 14, 1982. It still features a long bar and many imported beers.

Chester’s offers a variety of 250 beers, including specialty beers from Scotland, Belgium and a grapefruit beer from Austria.

“There are other brands too that people just can’t purchase or find in a local beer store because it’s imported through a private stock order,” Robis said. “People still go out and enjoy a beer at night and we offer a wide variety.”