…In which I swoon and (try-not-to) fangirl

In which I meet the Doctor and Rory Pond-Williams and try not to swoon. I think I held it together pretty well.

This weekend I had the immense pleasure to meet (re: see from afar) the Cap’, the Admiral, Drax, and the Doctor and one of his companions.

It sent my heart aflutter, that’s for certain.

Fan Expo Toronto came and went with all the typical fanfare and hype visiting celebrity guests bring to any town. This year’s event took over the north and south building of the Metro Convention Centre in downtown Toronto as cosplayers and geeks took to the streets. Between video game and big named vendors, to the many stalls in Artist Alley, the large crowds the convention draws is not a place a claustrophobic would like to be. Seriously, sometimes you get up and personal in someone’s armpit or sweaty chest, and it’s only out of politeness you say it’s alright while trying to discretely wipe your face.

As with all conventions with an A-list of guest panels set-up, the line-ups were insane. Big names like Stan Lee or Nathan Fillion will have line-ups starting hours before the panel begins. That said, I’m one of those people who don’t mind waiting in line for hours at a time; it actually gives me an excuse to read a book I haven’t had the chance to get to, or finish off some paperwork that has been neglected. It’s also a great time to get out of the crowds and catch a breather.

This year I was able to catch several panels, the first of which was Edward James Olmos, also known as the Admiral (of Battlestar Galactica fame). Engaging yet politically minded, his panel is now listed as one of my favourites. Between the shout outs to fans and his light-hearted answers, he delved into social activity and spoke about non-violent civil demonstrations and channelling Ghandi. Battlestar Galactica, for those of you who haven’t seen the show as yet (in which case you a seriously missing out), was a groundbreaking show at the time. In the age of terrorism and religion and extremism, BSG made connections to political realities and the state of the world – it literally had you sympathizing with suicide bombers before the dawning realization hits you that this is what is happening in the Middle East. The panel was thought-provoking, full of humour, and I loved it. 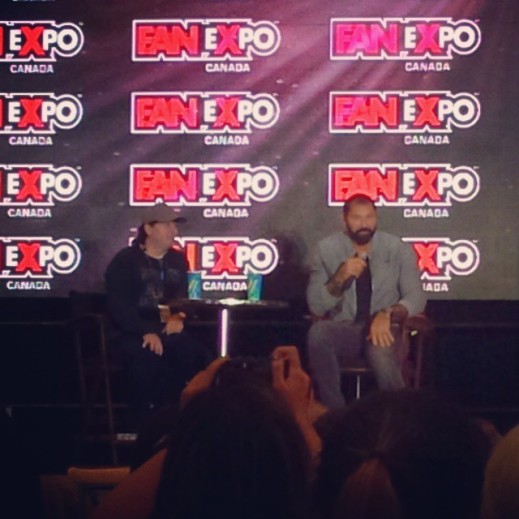 Dave Bautista (right) and his manager at Fan Expo.

On a lighter note, I also attended the panels of Nathan Fillion (aka Captain Malcolm Renolds) and Dave Bautista (Drax “The Destroyer”). Each had its own highlights and both were engaging and gracious in their own rights. For Fillion’s panel, a fan who had formerly met him at a previous panel invited him to her wedding (short story: she had been terminally sick, met her love during that time, was encouraged by Fillion and is extremely glad and happy to have met Fillion previously).  As for Bautista, those muscles! Though only half an hour long, he spoke of stories of how he went from Entertainment Wrestling to acting (and how he cried when he received the role of Drax), to giving advice on become a wrestler (be healthy, lots of training) or actor (don’t give up).

The last panel I attended at Fan Expo was with the cast of Dr. Who, featuring the Eleventh Doctor (Matt Smith) and Rory Pond-Williams (Arthur Darvill). Everyone I know is a fan of something or another, it doesn’t necessarily have to be geek-related per say, but we all have those moments. This was mine.

Skipping the panel, which including Smith and Darvill singing Queen’s Bohemian Rhapsody and Happy Birthday to a little girl and lots of laughter, my fangirl moment was during the photo-op with the duo. I honestly didn’t expect my heart to skip a beat, but hell, it happens. Now, outwardly I’d like to say I kept it together. Internally, I was melting – Matt Smith rubbed my shoulder and said THANK YOU.  Four days later and I’m still gushing *insert palm to face*

Annnnnnd deep breath….and release. Yea, we all have those moments, don’t even lie.

Getting back to reality for a minute or two, the fact that it must have been a ridiculously long day for both of them, followed by smiling for hours on end for a long line-up of fans wanting pictures, I salute them both. Charm and charisma aside, they were both down-to-earth guys…and actually shorter in real life than I expected (this said from someone who is 5’2″).

Next up, time to revisit San Diego Comic Con.